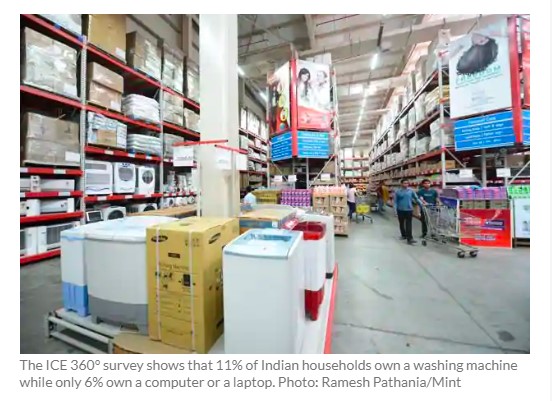 A majority of Indian households own a TV while 29% own a refrigerator, according to the ICE 360 survey

In his 2010 bestselling book, 23 Things They Don’t Tell You About Capitalism, Cambridge University economist Ha-Joon Chang made a somewhat provocative argument: the washing machine has changed the world more than the Internet has, he contended. By reducing the time that women traditionally spent on washing clothes, it contributed to a rise in female labour participation rates, to a decline in fertility rates, and transformed societies in the industrialized world, Chang argued.

In contrast, economists are still searching for the productivity gains that the Internet might have brought about. As the Nobel-winning economist Robert Solow famously quipped, economists can see computers everywhere but in productivity statistics.

Households from at least one large developing country may be partly vindicating Chang’s thesis by purchasing washing machines in far greater numbers than computers. Fresh data from a large-scale nationally representative survey conducted this year shows that the washing machine has become a more popular household asset than the computer in India. The ‘Household Survey on India’s Citizen Environment & Consumer Economy’ (ICE 360° survey) shows that 11% households own a washing machine while only 6% own a computer or a laptop. The survey covering 61,000 households is among the largest consumer economy surveys in the country. 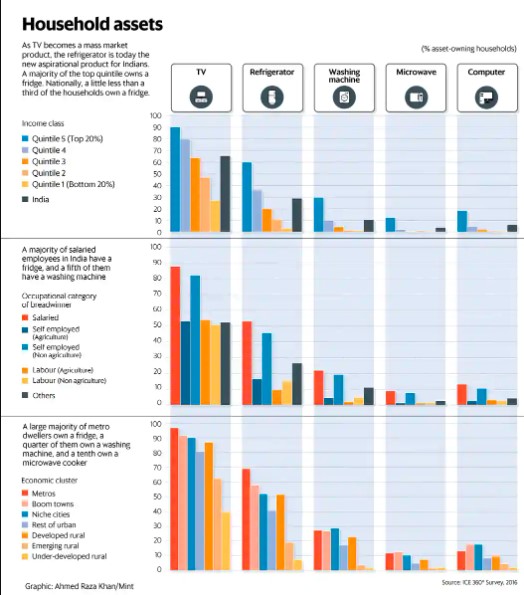 It needs to be kept in mind that while the 2011 figures were based on a complete census, the 2016 figures are estimates based on a survey and hence need to be interpreted with greater caution. Nonetheless, estimates such as these based on a nationally representative survey usually provide a fair sense of the direction of change, even if they understate or overstate the pace of change because of sampling errors.

One big reason why the computer (or laptop) seems to be losing popularity is the rise of Internet-enabled mobile phones, through which most people in India access the Internet today. Nonetheless, the popularity of washing machines over computers in the land of information technology is surprising. Whether this eventually leads to gains for women in the job market remains to be seen. Other countries which saw increasing adoption of household appliances and a jump in female labour force participation rates in the industrialized world also had widespread access to amenities such as piped water,  which nearly half of Indian households lack .