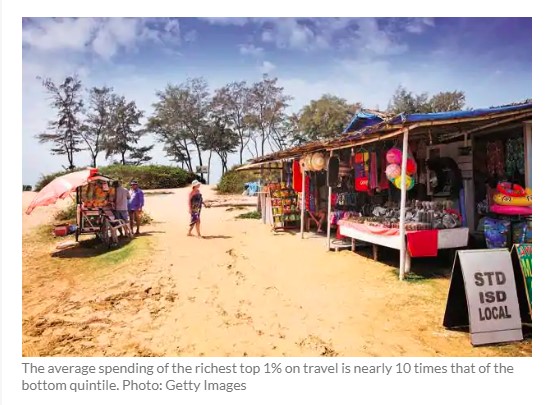 New Delhi: You may think that eating out and taking a holiday trip are some of the simpler pleasures of life, but fresh data on household spending across India shows that an overwhelming majority of families in India may find such pleasures beyond their reach. Eighty-six per cent of households never take a trip, and 76% of households never eat out, according to the ‘Household Survey on India’s Citizen Environment & Consumer Economy’ (ICE 360° survey) conducted this year. The survey covering 61,000 households is among the largest consumer economy surveys in the country.

Nearly a quarter of the top 1% reported eating out at least once a month. Twenty-eight per cent of them eat out occasionally while 47% never eat out, as per the ICE 360° survey. In contrast, 81% of the bottom quintile (poorest 20%) never eat out. Among the top decile (or top 10%), 60% never eat out.

The average metro dweller spends Rs10,474 per annum on eating out and Rs6,446 on travel. The data on eating out does not include eating out at social or religious functions, and only includes family members eating out together at eateries or restaurants.

The ICE 360° survey also gathered information on upgrades or repairs to houses. It turns out that the greatest proportion of households which spends on such expenses belongs to the bottom quintile, with nearly a fifth of them undertaking such repairs. This may partly be because the houses they live in are largely kutcha houses of poor quality. Seventy-six per cent of the poorest qunitile lives in either kutcha or semi-pucca houses, the survey shows. The comparative figure for the top quintile is 35%.

Fourteen per cent of the top percentile spend on house upgrades and repairs but the amount they spend is significantly higher than the average for the top quintile. While the top quintile spends Rs45,287 per annum on such upgrades and repairs, the top 1% spends Rs1.1 lakh on such expenses. The comparative figure for the bottom quintile is Rs9,587.

The urban sample of the survey is comparable to that of the National Sample Survey Office (NSSO) consumer expenditure survey conducted in 2011-12. While the NSSO surveyed 101,651 households of which 41,968 (41.3%) were urban households, the ICE 360° survey covered 61,000 households of which 36,000 (59%) are urban households. The rural sample of the ICE 360° survey is less than half of the NSSO sample. Nonetheless, all the estimates of each region have been derived by adjusting for the respective population of those regions.