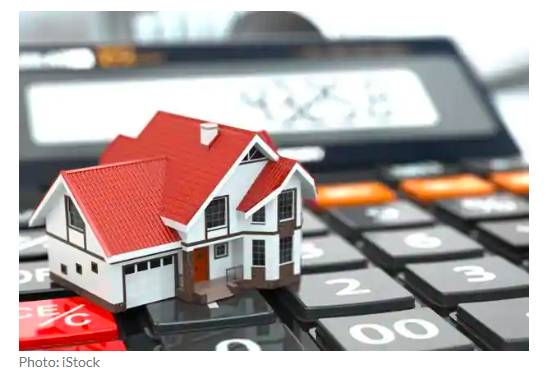 If you thought home ownership was a sign of wealth and prosperity in India, think again. Unlike in the West, most poor people live in their own homes in India, and it is the relatively more affluent sections of Indian society that live on rent, shows data from a nationally representative consumer survey conducted this year.

Ninety-seven per cent of households belonging to the bottom-income quintile (or the bottom 20% of India’s income distribution) live in their own homes, according to the Household Survey on India’s Citizen Environment & Consumer Economy (ICE 360° survey) conducted in 2016. The proportion of households in the top-income quintile (or the top 20% of India’s income distribution) who live in their own homes is relatively lower at 81%, shows the survey. 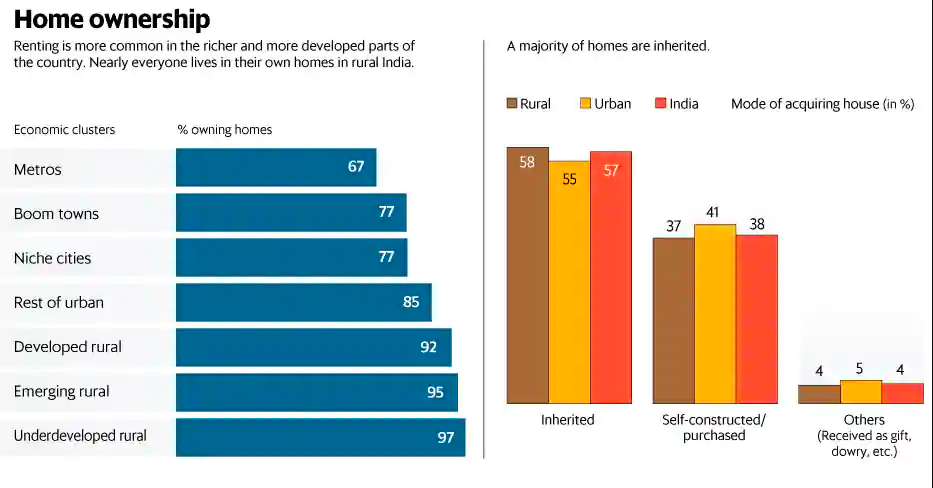 As you move from an underdeveloped rural area to a metro, the chances of renting a house increase, shows the survey. It also reveals a stark difference in how much top-income groups spend on home purchases compared to middle- and lower-income groups.

The urban sample of the survey is comparable to that of the National Sample Survey Office (NSSO) survey. While NSSO surveyed 101,651 households of which 41,968 (41.3%) were urban households, the ICE 360° survey covered 61,000 households of which 36,000 (59%) were urban households. The rural sample of the ICE 360° survey is less than half of the NSSO sample. Nonetheless, all the estimates of each region have been derived by adjusting for the respective population of those regions. 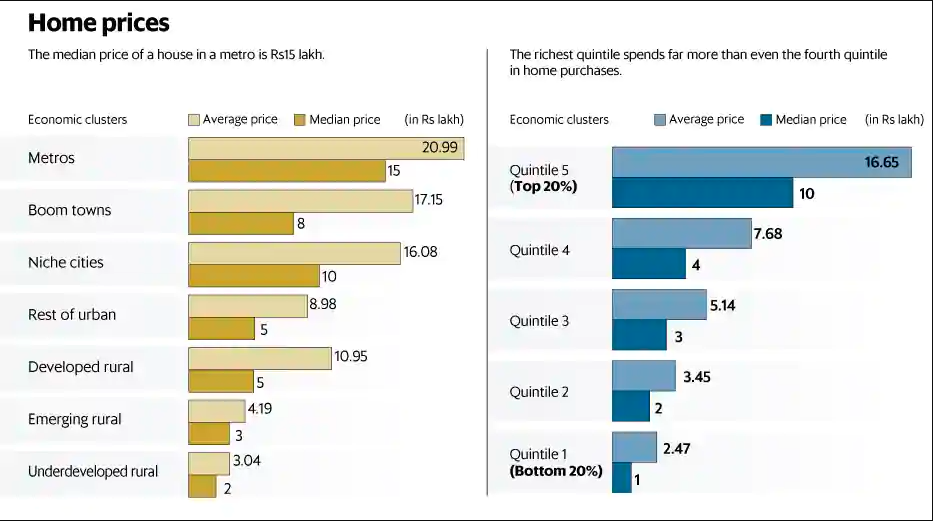 The class divide in house prices is not so surprising given the qualitative differences in houses between the income classes. Forty-two per cent of the bottom quintile lives in kutcha houses whereas in the top quintile, only 6% households live in kutcha houses. Nationally, 20% households stay in kutcha houses, 35% in semi-pucca ones and 45% stay in pucca houses. 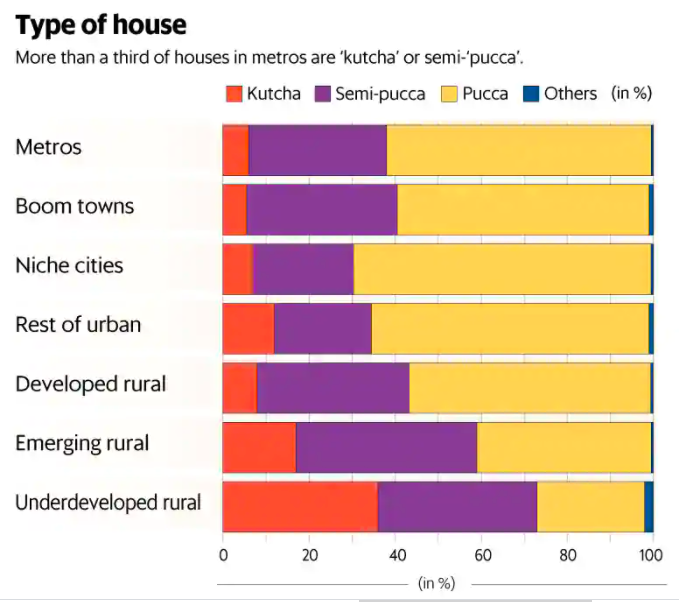 It is because of the preponderance of low-quality and small houses in India that most people in the country find themselves in the ranks of home owners. A study by an independent researcher, Arjun Kumar, published earlier this year in the Economic and Political Weekly, and based on data from a previous survey on house conditions conducted by NSSO in 2012 showed that the average area of each dwelling unit (house) was 431 square feet (sq. ft) in rural India and 422 sq. ft in urban India. In terms of per person area, urban areas are slightly better off, with an average of 124 sq. ft per person compared to 107 sq. ft per person for rural areas. To put these numbers in perspective, the median size of a completed single-family house in the US was 2,467 sq. ft, while that of a multifamily unit was 1,057 sq. ft, according to the United States Census Bureau data for 2015.

The ICE 360° survey shows that 97% households in underdeveloped rural areas live in their own homes. In metros, the same proportion is much lower at 67%. Thirty-two per cent of households stay in rented houses in metros. Across urban India, nearly 21% urban households live in rented houses. In rural India, only 3% rent houses. A greater proportion of migrants and a bigger rental market in metros mean that more families live on rent in such cities.

The average monthly rent in urban India is Rs2,659 while the average rent in rural India is Rs2,217, shows the ICE 360° survey. In 2012, the mean monthly rent paid by households living in rented houses was Rs886 and Rs1,919 in rural and urban areas, respectively, according to Kumar’s calculations, indicating that the past few years may have witnessed a significant rise in rent across rural and urban India.