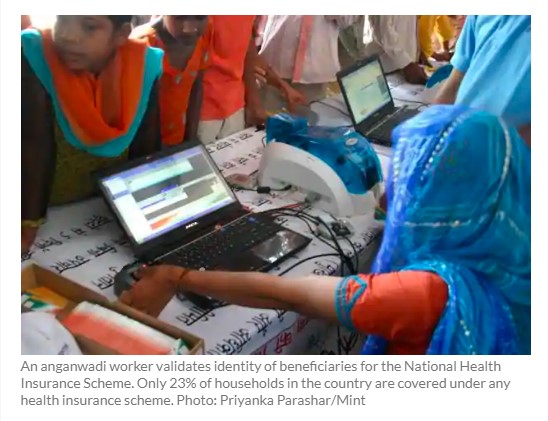 State governments’ health insurance schemes seem to be more popular than those from the centre, finds the ICE 360 survey

The low penetration of health insurance and high health costs expose Indian households, especially those at the bottom of the pyramid, to severe financial shocks, according to fresh data from a large-scale nationally representative survey. The ‘Household Survey on India’s Citizen Environment & Consumer Economy’ (ICE 360° survey) conducted this year shows that 3% of households in the top quintile (richest 20%) faced a health shock that wiped out more than a fifth of their annual income. The comparative figure for the bottom quintile (poorest 20%) was more than double at 6.8%. 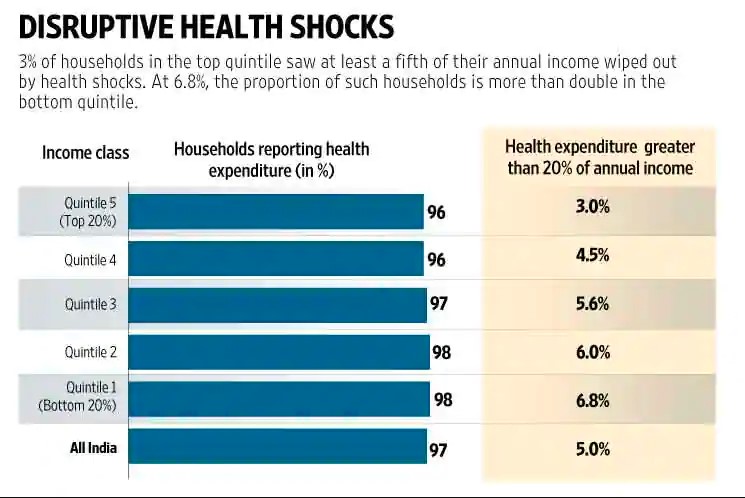 The survey shows a similar divide between households living in metros and those living in underdeveloped rural areas. The ICE 360° survey 2016, covering 61,000 households, is among the largest consumer economy surveys in the country. The response period of the survey was April 2015 to March 2016.

The ICE 360° survey shows that 47% households consult a doctor at a public health facility when a family member falls ill while 38% households visit a private health facility; 14% consult an independent medical practitioner. The preferences of the bottom and top quintile households are roughly similar in this respect but the preferences of households belonging to the top percentile are very different. Among the top percentile, just 34% use a public health facility while the rest use a private facility or an independent medical practitioner when any family member falls ill. 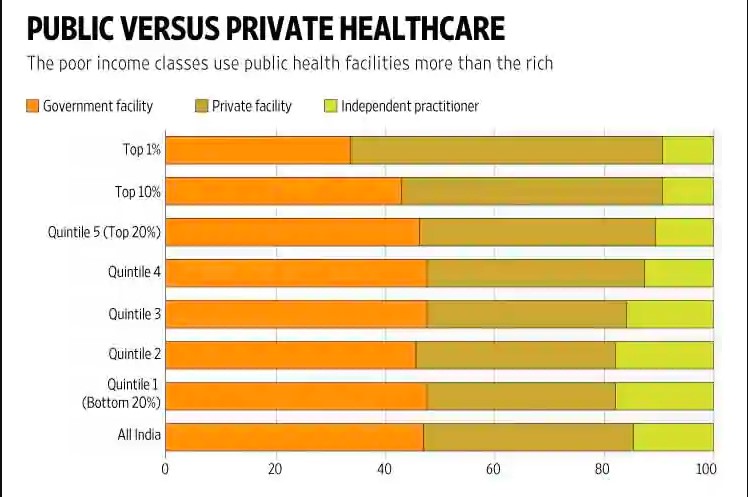 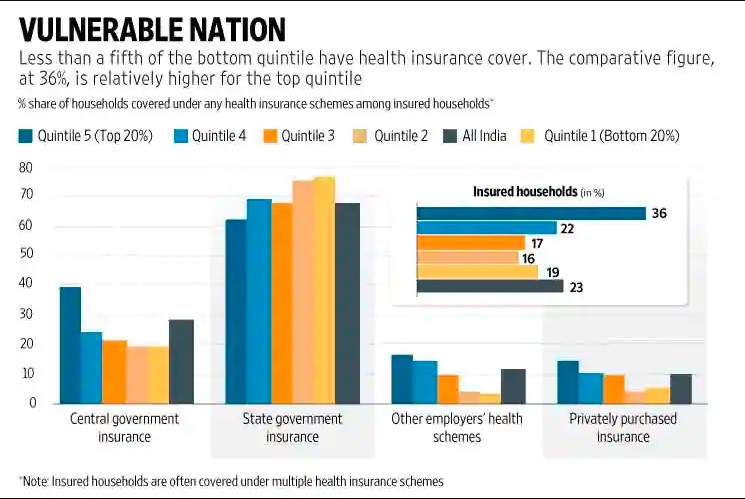 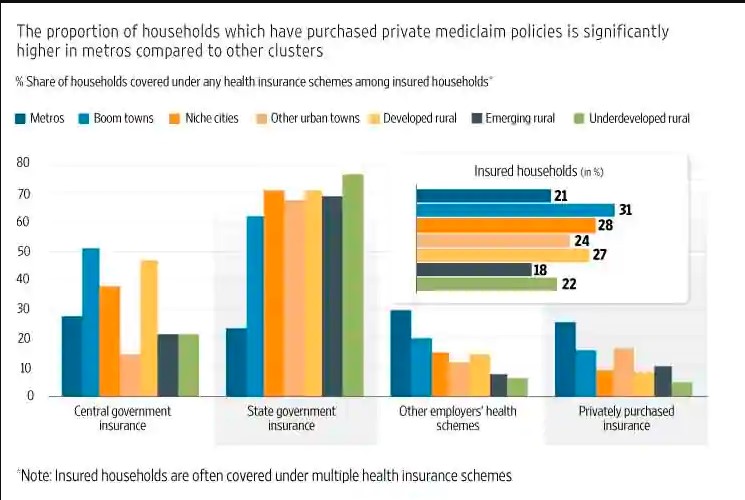 The ICE 360° survey was conducted by the independent not-for-profit organization, People Research on India’s Consumer Economy (PRICE), headed by two of India’s best-known consumer economy experts, Rama Bijapurkar and Rajesh Shukla. The urban sample of the survey is comparable to that of the National Sample Survey Office (NSSO) consumer expenditure survey conducted in 2011-12. While the NSSO surveyed 101,651 households of which 41,968 (41.3%) were urban households, the ICE 360° survey covered 61,000 households of which 36,000 (59%) are urban households. The rural sample of the ICE 360° survey is less than half of the NSSO sample. Nonetheless, all the estimates of each region have been derived by adjusting for the respective population of those regions.

In metros, 3.3% households witnessed a health shock, which wiped out more than a fifth of their annual income. The comparative figure is double in underdeveloped rural India at 6.6%, the survey shows. Overall health insurance coverage is lower in metros compared to other urban clusters, largely because of the low adoption of public health insurance schemes in metros, the survey shows. But the adoption of private mediclaim policies is significantly higher in metros compared to other clusters. 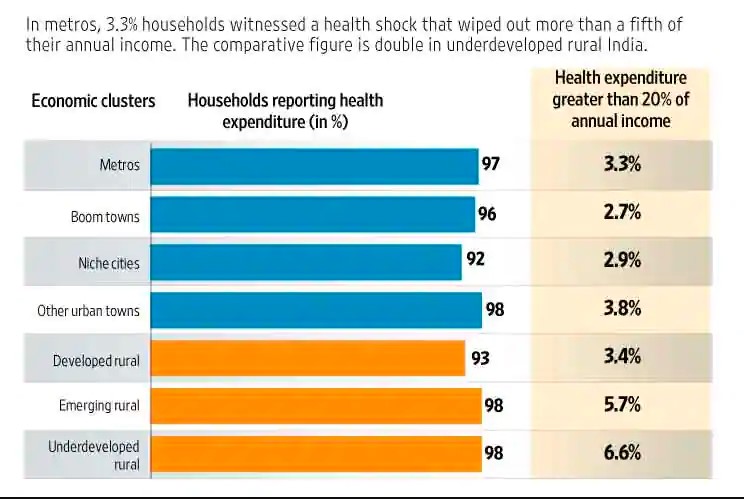 Data from NSSO surveys on healthcare expenditure also show that the penetration of private health insurance is lower among rural and lower income groups. 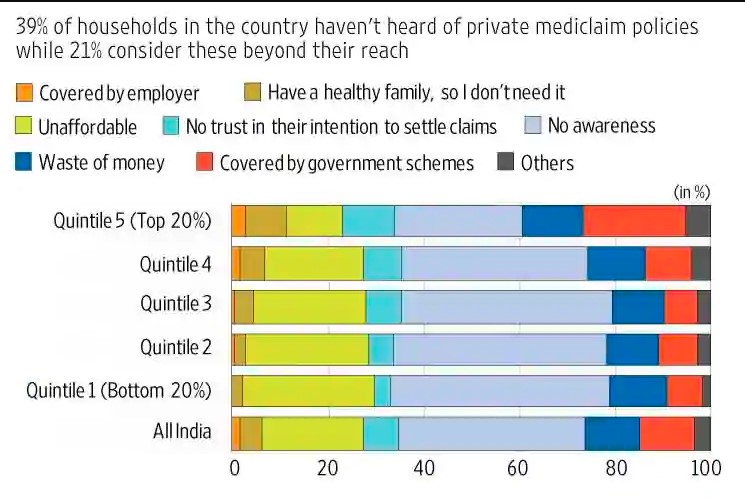 The study suggests that access to public health insurance schemes may not have lowered the health costs of households but has increased the likelihood of hospitalization.

“This could mean that people suffering from ailments are more likely to be treated if they are covered by insurance,” the authors of the study wrote.

As an earlier Plain Facts column pointed out, the lack of affordable and accessible healthcare facilities in India often cause people to delay or avoid recognizing illnesses, let alone seek treatment for them. If public health insurance schemes are driving people to report their illnesses and to seek treatment for them, that in itself is a significant first step in the battle against ill-health in the country.