New Delhi: The poor use India’s massive public distribution system (PDS) for foodgrains much more than the rich, and rate the quality of grains more favourably than richer income classes, a large-scale nationally representative survey conducted this year shows. The ‘Household Survey on India’s Citizen Environment & Consumer Economy’ (ICE 360° survey 2016) shows that 73% of households belonging to the bottom quintile avail grains from the PDS. The proportion of households belonging to the top percentile that avails PDS grains is less than half that figure at 35%. 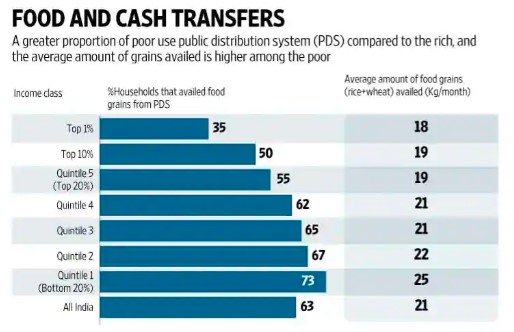 The PDS gets higher approval ratings from the poor than the rich. A third of the bottom quintile (the poorest 20%) rated the quality of grains availed through the PDS as good while only 12% of the top quintile (the richest 20%) thought the same. Among the top percentile (richest 1%), the figure was even lower at 9%, the ICE 360° survey shows. Nonetheless, even the poor seem to favour a shift to cash transfers, the survey shows. The ICE 360° survey is among the largest consumer economy surveys in the country. The response period of the survey was April 2015 to March 2016. 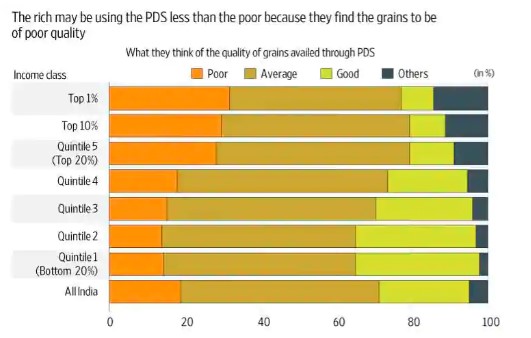 Among the poor, disapproval of the central government seems to be higher, with 10% of the bottom quintile rating the performance to be low, and 31% rating it high. A much higher proportion of the top percentile rated the central government highly and a lower proportion rated its performance as low, indicating greater support for the Narendra Modi-led government among the super-rich. The survey does not tell us whether these preferences have shifted after the government scrapped high-value banknotes on 8 November. 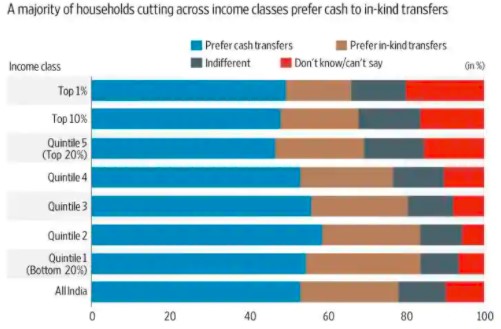 The ICE 360° survey shows that India’s largest welfare scheme, PDS, not only reaches the poor more than the rich but it also confers greater benefits on the poor. The average amount of grains (rice and wheat) availed by households in the bottom quintile in an average month during the response period was 25kg while that availed by households in the top percentile was 18kg.

Over the past few years, empirical studies by a number of economists have shown that PDS leakages have fallen over time even as its coverage has expanded. As an earlier Mint analysis based on National Sample Survey Office (NSSO) data showed, the PDS has become more progressive over the past decade. Yet, despite the progress, leakages continue to plague the PDS. 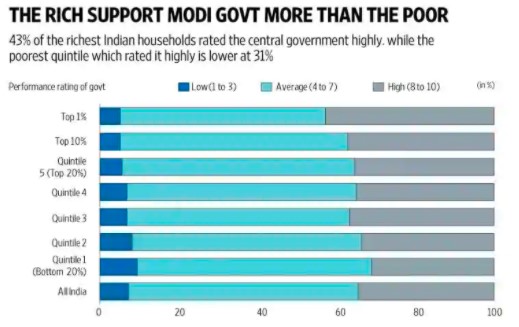 Perhaps it is because of these limitations that a majority of respondents reported that they would prefer to receive cash transfers ‘which is enough to buy equivalent ration from the market’. 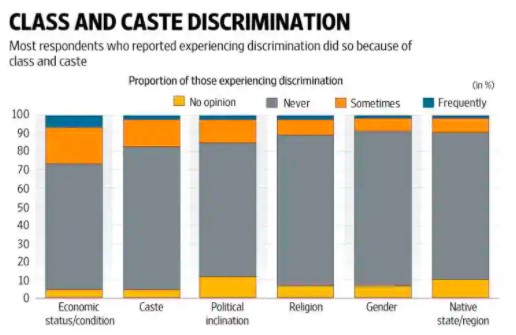 The urban sample of the survey is comparable to that of the National Sample Survey Office (NSSO) consumer expenditure survey conducted in 2011-12. While the NSSO surveyed 1,01,651 households, of which 41,968 (41.3%) were urban households, the ICE 360° survey covered 61,000 households, of which 36,000 (59%) are urban households. The rural sample of the ICE 360° survey is less than half of the NSSO sample. Nonetheless, all the estimates of each region have been derived by adjusting for the respective population of those regions. 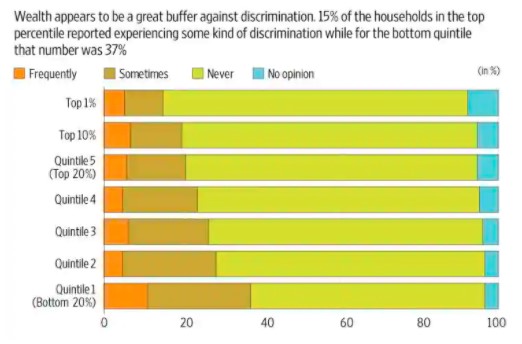